I can haz OOCSS?

Consider a new web project: a start-up dreams of developing THE indispensable webapplication of tomorrow’s web. They choose wisefully technologies, frameworks, environments they’ll use… However, the front-end rendering will still the same for the browser: HTML, CSS and Javascript.

But here’s the thing: even if the whole application will probably take advantages of some frameworks, have a look over the stylesheet and you’ll probably get something like that, with or without preprocessor:

This kind of code will cause a lot of hassles over time:

If you add some messy organisation for CSS files, then you get a spaghetti code which would lead to a lot of troubles, errors, code duplication as new developers enters the ring over time.

This extreme dependency between the HTML structure makes the code be especially fragile: even if it’s clean, a simple mistake of a non-expert can ruined it completely.

In short, these non-mature practices will make things harder for the start-up and promises long sleepless nights of debug and refactor.

Finally, the problem here belongs to the 1:1 relation between CSS and the number of blocks, pages, modules of the website. As long as it grows, the stylesheet grows as well. That implies development time, and so money… We could do better in terms of ROI.

The Object Oriented CSS (OOCSS) bring its own solution to these problems. It’s nor a new preprocessor, nor a new language, but a code philosophy. It’s a set of best practices, rules and advices to help your CSS become scalable.

Usually, elements of a website have a visual aspect which is repeated in different contexts : colors, font, borders, … the graphic charter in a whole. This is the skin.

In the same time, a bunch of “non-visible” properties are repeated : width/height, overflow, etc. This is the structure.

If you separate them, you create re-usable components that can be shared into elements which have same properties. And so we speak about objects, which may sound familiar to back-end developers by the way.

The deal here is not to stupidly constrain the style of an element (the content) to the its context (its container).

If you are designing titles, why limit yourself to those who are into the <header>, just because this is the only title place for now? Plus, it’s very likely that all your titles have a consistent design in your whole website for ergonomics concerns.

It’s even more true for modules.

Why is OOCSS good?

Here are the 10 best practices that are part of the OOCSS spirit:

Legos first - A best practice is to design individual pages after having created basic components for the whole website.

The 9 pitfalls to avoid

Here are the 9 pitfalls to ban, according to the OOCSS spirit:

As the project is going on, you will be able to create whole new pages combining existing elements without adding any CSS, even for a completely new architecture.

Re-use elements is also a totally free performance gain! You’ll create new elements with 0 line of CSS code, what could be better?

OOCSS force you to think the website as a whole instead of focusing on simple pages put one along the others. You should anticipate the future.

Finally, the main advantage of this philosophy IMHO is that it makes your CSS modular, easier to maintain. This modularity makes your CSS robust: a new developer would be less likely to break the design when working on it.

OOCSS, how does that works?

With these good practices in mind, let’s see how to apply the philosophy on a daily code.

Let’s take the favorite example over blog posts: buttons. A “classic” CSS would look like this, I guess:

In the end, you come with a lot of redundancy and a #button-activation which is nothing but a large version of #botton-primary.

If you refactor this CSS with OOCSS principles, you’ll get something more flexible:

.button define the generic properties - the “defaults” ones - for our buttons. If you override it, you come with new classes that you can combine to get the expected result, just like Legos!

Here was the trick.

It did happen, sometimes, that my code looked like this when developing the main design:

Here again, it’s a fail: I am duplicating code, which is useless and I didn’t even notice that!

The elements I defined here are simply not re-usable. They directly rely on a specific container. But it’s clear enough that some properties are not specific to this container.

And so I may have consider the following alternative:

You may think “Why should I care? We don’t really reduce code here!“. For sure that’s true here… if you only focus on the title.

But OOCSS makes you think further about the future of your website. Here we don’t just improved titles flexibility, but we add few new elements:

The most famous example which illustrate OOCSS is the media object created by Nicole Sullivan. It saves hundreds of lines of code. 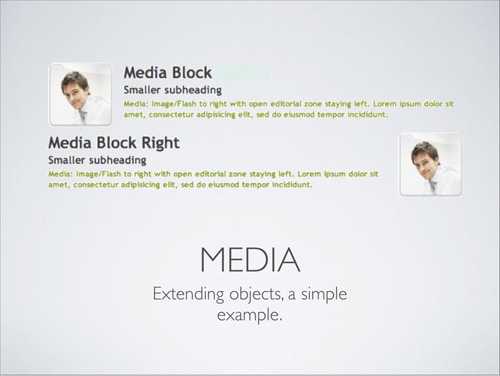 It’s nothing but an abstract object which represents a media object - a picture, a video - aside to a media body - typically a text -, to its left or to its right.

It’s a typical scheme that is repeated everywhere. Think about the Facebook display.

These few re-usable lines of CSS will save a lot of time and help to improve performance over a whole project.

You’ll note that Bootstrap has implemented it, just like inuit.css, which is not that surprising when you consider these two frameworks use OOCSS concepts.

Harry Roberts has recently proposed the flag object which incorporates more or less the media object with the vertical centering concept.

Implement the OOCSS in your project

First of all, you need to understand and adhere to the philosophy. There is no absolute rule and best practices change as the web develop and evolve. Plus, you should always consider the context of your project and define what is good for you.

That said, we can sum up the implementation of an OOCSS spirit with some concrete practices:

No need to say that these philosophy is a non-absolute vision of CSS that we could debate on.

However, we can point out the following things:

Even if OOCSS is now a well-spread vision for the benefits it brings, I must say that I was suspicious when I read the assertion: “avoid the use of ID in CSS, ever”.

But since I understood the benefits of this practice, I warmly recommend it.

That said, as I get smacked for my code organisation, I now use IDs in my CSS in a unique place : the layout.

It’s just a matter of adaptation to your project needs and philosophy.

Another vision of CSS give its importance to the context of elements.

It’s another philosophy, interface-oriented which considers that CSS is defined to design the existing HTML interface. To pollute HTML with classes is a non-sense when selectors and good code organisation can deal with the design.

Even though I don’t adhere to this practice - at least for a project which is meant to evolve -, it’s an interesting philosophy which could be relevant for small projects, for instance.

Here is a list of links you may have a look to go deeper into OOCSS:

Our little dive into OOCSS is now over.